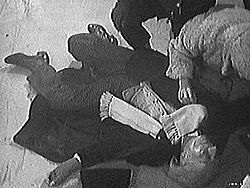 Regeneration, is a biological ability exhibited by Time Lords, a race of fictional humanoids originating on the planet Gallifrey. This process allows a Time Lord who is old or mortally wounded to undergo a transformation into a new physical form and a somewhat different personality. The process has been used ten times to introduce the Doctor with a new face.
Conceptual history The First Doctor collapses prior to his regeneration (from The Tenth Planet, 1966). The role of the Doctor had been played by William Hartnell at the programme's inception in 1963. However, by 1966, it was increasingly apparent that Hartnell's health was deteriorating and he was becoming more difficult to work with. By the time the second story of Season 4, The Tenth Planet, was greenlighted, the decision had been made to replace Hartnell. Script editor Gerry Davis proposed that, since the Doctor had already been established as an alien, the character could die and return in a new body. Producer Innes Lloyd further suggested that the Doctor could do this "renewal" regularly, transforming from an older man to a younger one. This would allow for the convenient recasting of the role when necessary.[1] The process itself was modelled on LSD trips with the experience being like the "hell and dank horror" of taking the drug.[2]

At the conclusion of The Tenth Planet, the First Doctor collapses from apparent old age and exhaustion, having commented earlier that his body was "wearing a bit thin". Then, before the eyes of his companions Ben and Polly, and the viewing audience, his features shift into that of theSecond Doctor, played by Patrick Troughton.

On screen this process was not called "regeneration", but a "renewal". In The Power of the Daleks, the Second Doctor's first story, the Doctor draws an analogy between the renewal and a caterpillar turning into a butterfly.[3]

In the About Time reference series Lawrence Miles and Tat Wood note that the officially licensed magazine, Doctor Who Monthly, stated in a "Matrix Data-Bank" column in 1982 that its readers should not confuse the "regenerations" of later incarnations with the "rejuvenation" of Hartnell into Troughton.[4]

It was not clear initially whether the renewal was a natural ability of the Doctor's as opposed to a process initiated by technology. In Power, the Doctor describes his renewal as a function of his TARDIS, stating that "without it, [he] couldn't survive."[3]

When Troughton left the series in 1969, the Doctor was renewed again, but this time it was forced on him by the Time Lords at the conclusion of The War Games, where it is referred to as a "change of appearance". Once again, this suggested that it was a superficial physical change, not one of personality, although Jon Pertwee's portrayal of the Third Doctor also differed quite substantially from Troughton's. In addition, this change is treated as a punishment rather than a natural process – the Second Doctor protests, "You can't just change what I look like without consulting me!"

It was only at the end of the Third Doctor's era, in Planet of the Spiders (1974), when Pertwee's Doctor turns into Tom Baker's Fourth Doctor, that the change is finally called "regeneration" and is explained as a biological process that occurred when a Time Lord's body was dying. It is also stated that following the regeneration the Doctor's brain cells would be shaken up and his behaviour would be "erratic" for a time, something that would be true for most subsequent regenerations.

As the series continued, more aspects of the regenerative process were introduced, but the basic concepts of regeneration as accepted by fans of the series today were only firmly established in the final scene of Planet of the Spiders. This notwithstanding, it is now generally accepted by fans (from an in-universe perspective) that the "renewal" of the First Doctor into the Second and the "change of appearance" of the Second Doctor into the Third were both part of the same process of regeneration. This has been further supported by on-screen dialogue that has explicitly enumerated the number of times the Doctor has regenerated and has counted the First-to-Second "rejuvenation" among them (these episodes have included Mawdryn Undead (1983), The Five Doctors (1983), the 1996 television movie, and more recently episodes such as The Next Doctor, The Eleventh Hour and The Lodger).