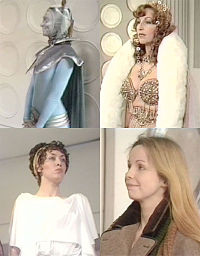 Romana tries on several bodies for size until settling on the last one, played by Lalla Ward (from Destiny of the Daleks, 1979). Romana's tongue-in-cheek regeneration scene in Destiny of the Daleks contrasts markedly with the Doctor's transformations. In the first episode of the serial, Romana undergoes regeneration, in the process trying out several different forms before choosing to adopt the appearance of Princess Astra, a character she encountered in a previous adventure (The Armageddon Factor).

Doctor Who television writer and script editor Eric Saward suggests in his 1985 novelisation of The Twin Dilemma (1984) that Time Lords can control the appearance of their next body if they trigger the regeneration voluntarily, but not if the regeneration is caused by death or injury. The Doctor Who Role Playing Game by FASA suggested that some Time Lords have a special ability to control their regenerations.

The fan reference book The Discontinuity Guide suggests that the various "try-ons" were projections of potential future incarnations like the K'anpo Rinpoche/Cho Je situation in Planet of the Spiders.[17] Miles and Wood's About Time also mentions this along with theorising that the Time Lords had improved the technology of regeneration since the Doctor's time; Romana, being of a later generation than the Doctor, would therefore have finer control over the regenerative process in its early stages.[18] Aside from the how of it, multiple attempts have been made in the spin-off media to explain the necessity for Romana's regeneration.