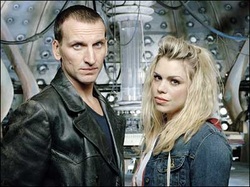 In her first trip with the Doctor, Rose witnessed the final destruction of Earth. There, Rose met the last "human", Lady Cassandra. However, Rose angered Cassandra by telling her how she's (technically, via time travel) the last human and was nearly roasted alive. After Cassandra was foiled/killed by the Doctor, Rose was taken back to 2005 to have chips. (DW: The End of the World)

The Doctor next took Rose to Cardiff by mistake, where she met Charles Dickens, who helped them stop the Gelth from escaping the rift and killing everyone to obtain new bodies. Rose learned a bit about how time can change during this adventure from the Doctor; this is when the Gelth seemed harmless and wished for a few bodies, confusing her as they weren't around in the future.(DW: The Unquiet Dead)

Per her request, Rose was taken home. However, instead of twelve hours later as the Doctor promised, Rose found she had been missing for an entire year; Mickey had been getting blamed by Jackie for her disappearance. Once Rose calmed her mother, she was shocked when an alien spacecraft crashed through Big Ben and into the Thames. When the Doctor suspected something fishy was occurring, Rose accompanied him to Downing Street, where she met Harriet Jones and discovered the Slitheen. (DW:Aliens of London)

She then helped the Doctor stop the Slitheen from reducing the Earth to a nuclear husk to be sold for profit by blowing up Downing Street with a missile. Much to her shock, Rose learned Harriet would become Prime Minister for three successful terms for Britain's "Golden Age". Packing some belongings to continue travelling with the Doctor, Rose promised her mother that the next time she'd see them, it would be ten seconds later (unknown to Rose, however, she did not return as she said she would). (DW: World War Three)
When the Doctor traced a distress signal to 2012 and landed in the Vault, Rose met a Dalek for the first time. Much to her surprise, as it rampaged and killed, trying to get out, the Dalek began changing from the DNA it absorbed from her along with radiation from the Time Vortex, developing emotions like pity. As it was unable to cope with emotions, the Dalek had her order its death... which she only did to put it out of its misery. During this time, Rose met Adam Mitchell, a genius she found attractive and had the Doctor take along as a fellow companion. (DW: Dalek)
Rose was next taken to the Fourth Great and Bountiful Human Empire, where she was told history had gone wrong; humanity was supposed to at the peak of perfection, but the technology is backwards. While investigating with the Doctor, Rose found the planet was being controlled by an alien called theJagrafess, who had been manipulating the information humanity received. Defeating it, Rose found Adam had taken advantage of time travel and tried exploiting foreknowledge. Along with the Doctor, Rose kicked him out of the TARDIS. (DW: The Long Game) In World War II London, the Doctor and Rose met Captain Jack Harkness, a former Time Agent from the 51st century, to whom she was also attracted. The Doctor and Rose took him along in the TARDIS. She also learned humanity is more loose about "dancing" in Jack's time because of the different species they can breed with. (DW: The Empty Child / The Doctor Dances)

On a refueling trip to Cardiff, Rose was taken hostage by Blon-fetch Slitheen, a survivor of their last encounter. After the for looked into the TARDIS's heart and was regressed back into an egg, Rose left Mickey behind to start a new relationship with someone else; she no longer felt attracted to him, only seeing Mickey as a close friend because of her time with the Doctor. (DW: Boom Town)

Throughout their travels, the phrase "Bad Wolf" followed the Doctor and Rose around through space and time. Following his discovery of a complex plan by the Daleks to invade Earth in the year 200,100 (DW:Bad Wolf), the Doctor, believing he might die soon, sent Rose out of harm's way to her home place and time. Seeing the words Bad Wolf as graffiti around her housing complex served as a message to Rose; she herself was crucial to the event and must return to the Doctor. Rose broke into the TARDIS and looked into its heart which enabled her to transcend into the Bad Wolf. As this goddess-like figure, she vaporised the Dalek fleet and brought Captain Jack back to life (unknowingly making him immortal), after paradoxically spreading the words 'Bad Wolf' through space and time to create the message. However, in becoming the Bad Wolf, Rose had absorbed the Time Vortex into herself, which would destroy her body, cell by cell. (DW: The Parting of the Ways)See Battle of the Game Station for a more detailed account of these events.The Doctor took those energies into himself by kissing her, sacrificing his ninth incarnation and regenerating before Rose's eyes into a new form. (DW: The Parting of the Ways)
Back
Powered by